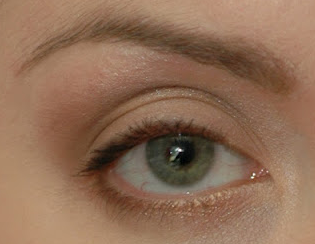 OKAY, GUYS!!  I've been promising to do an eyebrow post since y'all started requesting them after my first post on this blog...  I had to grow my eyebrows out, though, so I could have something to show you, and actually give you an eyebrow shaping/grooming post instead of a post about how I take three seconds to rip my stray fuzz out every few days.  Now I am complete ungroomed mess, so TODAY IS THE DAY!!!


I actually almost caved and did my eyebrows over the weekend, because I had a party to go to, but I didn't have time to do a blog post before going to the party, so I just made sure my bangs were down and went with my eyebrows all over the place.  That's commitment!!  That's love!!

Here is the thing with eyebrows (and with anything else you do to yourself, I suppose)... you just do what you want.  Right?  When I groom my brows, I opt for a more dramatic arch than some people would, because that is what looks best with the ways I like to do my makeup and the shape of my glasses.  Some of you are maybe on a more natural trip, or are going for that American Apparel hipster model look, where you try to look bushier in the brows, and you just want to clean things up.  Some of you might be on that crazy super-goth chick/drag queen thing where you take hella eyebrows off and then draw them in so they are like WHOA.  It's all good.  You do you.  I am just gonna give y'all a basic overview on how I do my eyebrows, and a general idea of how to shape things up, and you can fiddle around so your brows look how you want them to look.


Totally off topic, but I used to work with a lady, back when I worked with people, who had eyebrows that were INSANE.  I think she might have waxed them all the way off, then drew them on with black liquid liner so they were halfway up her forehead and made her look really mad.  It looked good on her, though, since it went well with her overall look.  That's kind of what I was talking about up in that last paragraph-- there is no right or wrong way to do it, as long as your one eyebrow matches the one on the other side of your head, and they look good with the rest of your face.


I have a round face, and a short forehead, and I usually do my makeup in a more classic style, so I do my brows in a more classic shape, only I tend to arch them a little bit higher, and a little thinner than the bog-standard eyebrow job.  That is just my personal preference.  I also color my eyebrows, because my hair is really fair and you can't see my rad shaping job if my eyebrows aren't dark.  Obviously, if you have your natural hair color, or one that is similar to your natural color, you're not going to want to do that.  On the same tip, if you lighten your hair, you probably want to leave your eyebrows alone.  This is probably going to be one of the only times I inject my personal opinion into what I think other people should do with their faces, but I think it always looks gross and weird when people bleach their eyebrows.  Then they started doing it all the time on makeover day on America's Next Top Model, and I just had to stop watching.  That shit looks horrible.  It is only slightly less weird and yucky than just shaving your brows all the way off like the homeboy in The Wall.  BUT I DIGRESS.


There are a couple methods for grooming your brows: tweezing and waxing.  Tweezing is better if you don't want to be too dramatic about your eyebrows, or if you are just getting stray hairs from areas you previously waxed.  Waxing is better if you have a lot of hair to remove, or if you are impatient.  I usually do a combo of the two methods, and wax the bulk of my eyebrows and tweeze around until they match and look good.  I also wax because I wear eyeshadow on the regular, and I think it looks better when I get all the peach fuzz that hangs out around the hairs that I get rid of.  You don't need to wax, but if you are lazy/don't want to spend forever plucking/have a larger area to cover, then you might want to.


I am going to say here that you can also have your brows threaded, but I don't know how to do that, and I am sure if you need me to tell you how to tweeze and wax, you don't know how to either, so let's leave that to advanced-level eyebrow grooming.  I just wanted to inject that in here so people aren't like YOU FORGOT ABOUT THREADING!!!!


I would recommend a good pair of tweezers.  I've had some cheap pairs in the past, and they worked, but not that well.  Cheap tweezers get bent out of alignment pretty easily, and don't grip that great.  You can tweeze with them, but it will not be fun.  You will get all the irritation of plucking a spot, but have to go over the same spot more than once because of missed hairs.  Not fun.  Just get the standard old tweezer-style Tweezermans.  They have needle-tipped ones and other styles, but the regular old style works totally fine.  For some reason, the colored enamel ones work better than the plain stainless ones.  No idea why, that's just my experience.  There are probably tweezers out there that are more fancy, but the Tweezerman ones are pretty widely accepted as being the best choice, and they do free sharpenings (but I've never needed to have them sharpened, so...)


As far as wax goes, I buy the Sally Hansen strips, and then trim them into whatever shape I need.  I think wax that you smear and then put the strip and yank is messy and doesn't work as well.  I am sure they make strips for just eyebrows, but I get the strip kit because I can do my eyebrows for all of eternity with one box that costs about $6.  I am serious when I tell you that I do not buy wax because I run out, I buy wax because I lost my previous bag of wax strips.  The Sally Hansen strips are tidy and easy to deal with.  I can't say whether these strips are good for other types of waxing, though-- I don't really do anything about the fuzz on my face because it is light and not very visible, and removing facial hair always makes me break out, which looks worse than light fuzz.  I don't wax my legs because shaving is fine, and I think waxing my pits would be an excruciating nightmare hellscape.  For crotch stuff, I use an electric shaver, because I am not trying to accidentally slice my clitoris off.  AGAIN, I DIGRESS.


So, anyway, here is the video I made about waxing my eyebrows.  I look a little bit like shit because I didn't put much makeup on aside from some mascara since I was gonna wax my brows...  OH WELL.


The gist of it, if you are not in the mood to watch that video...  Trim your brows with scissors and a comb (comb your brows straight up, and trim anything that goes past your upper brow line) or use a trimmer (here is my trimmer from the video...  I misspoke and said it was $20, but I guess it was closer to $10.)  Mark the points where you want your brow to start, peak, and end.  Then wax or tweeze around underneath... 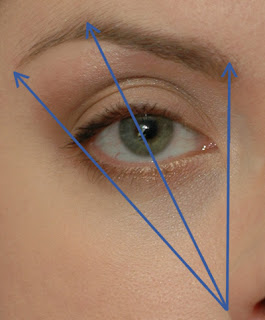 Plotting the beginning, peak, and and end (the end the side closer to your ear),
by lining the side of your nose with the inside edge of your brow, iris area,
and lower lash line/outside corner of your eye. 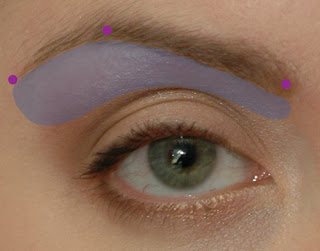 Here, you can see the points plotted out (this is where I drew dots with
a brow pencil, and colored in my shape in the video.)
The area I waxed is shaded in blue. 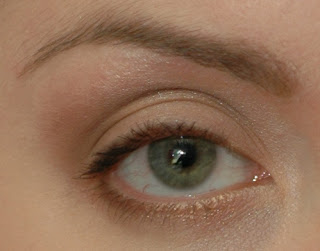 This is a close up, unobstructed pic of my eyebrow, all waxed and trimmed,
about an hour after I made that video up there.  I told you it would look
better once I washed my face, and washed the dots off my eyebrows.
Notice how you don't do anything above the brow, you just let it be natural
up there so you don't mess up the shape and look weird.

So, there you have it!

If you are new to the eyebrow waxing/tweezing/trimming thing, you might want to get it done professionally the first time.  It's not hard, but you might fuck up if you are real freaked out about it.  I've never had someone else do my eyebrows.  If I mess them up, I can get mad at myself and it's just more self-loathing to add to the pile, but if someone else charges me $30 and then messes my face up, that's not cool.  I prefer being mad at myself, compared to directing hateful thoughts at someone else, and also feeling ripped off on top of it.

The most important thing is to plan your attack, and to be conservative so you have enough hairs left to tweak things so the shape is how you like and your two eyebrows match.  If you go for the glory and try to get everything in one rip, you are going to make your brows too thin if you end up having to tweeze to make the two sides match.

In closing, here are a few links to eyebrow pencils/grooming slop I mentioned in the video, as well as a couple I've used and liked but didn't mention...
Benefit Speedbrow (my personal favorite.) That link is to the Speedbrow in "Neutral," but if you poke around Sephora or something, you can probably find the darker colors, if you are interested in something darker.
Lancome Le Crayon Poudre.  This is the pencil I am using in that video to comb and trim my hairs, draw dots on myself, and color my shit in after I'm done.  It's alright.  I don't have any complaints, but it's not so amazing that I'm not trying to use it up so I can get something different.
Tweezerman Brow Mousse.  This is the same idea as the Speedbrow, only totally clear and cheaper.  It's good to use a pencil to fill in your business, then go over it with something like this to make your eyebrows look tidy and give them a little shine.
Maybelline Eyebrow Pencils.  Basic-ass eyebrow pencils.  Honestly, eyebrow pencils are eyebrow pencils, a cheap one is going to work fine.  You probably don't want to use an eyeliner pencil, because it would be too heavy and hard to make look natural, but aside from that, it probably doesn't matter which eyebrow pencil you use.  If your hair isn't black or dark brown, just get something neutral/taupe, and you should be alright.  I get the dark shit, but I have black dyed hair, and I prefer a meaner-looking eyebrow style.  If that's not your bag, don't get dark eyebrow pencils.