I have a bit of a Love/Hatehatehatehate relationship with Pinterest.  On the one hand, I like to see the stuff people I know post on their boards.  On the other hand, it is a pretty janky piece of crap.

It's already been totally wrecked by spammy sites that flood the search results with dumb crap.  Theoretically, I should be able to search "Prada" and have a bunch of new Prada stuff pop up, and some people pinning sales, and I should be able to just click around and look at stuff.  Instead, when I search "Prada," the search result is the same picture over and over and over, and the text beneath all the pics is like "Prada Prada Prada Prada Prada."  I'm not clicking any of that.  Half the pics are even that stupid thinspiration stuff and stuff that looks like Etsy projects.  When you accidentally click something like that, it sends you to one of those trap websites, where it is some kind of scam and when you try to leave the page, it pops up some window that is all like ARE YOU SURE YOU WANT TO LEAVE THIS PAGE AND MISS OUT ON THE MIRACLE ACAI BERRY PROBIOTIC WEIGHT LOSS SOLUTION AND ANAL BLEACH?!?!  Yes, I am sure.

Aside from that, Pinterest is mainly comprised of projects for dumbasses.  Now, I know that some of the projects are legit...  those are usually ambitious projects designed to give you low self esteem because you don't have the attention span for a week long project, or the million dollar house that will make your project look its best when it is leaning up against your $68,000 fresco.

ANYWAY, dumbass projects, right?  These are the projects where you read about how to do them, and you're all like "That won't work," or "That is an extremely bad idea."  For example, the project where they suggest that you get glow sticks, cut them open, pour the liquid in a jar, and give it to your children.  I've seen that pinned about eighty thousand times.  I think people just pin these because they think it sounds good, and they have no follow through.  They pin it, dust off their hands, and forget about it forever.

Don't even get me started on the recipes.  It's all fucking cream cheese, people.

ANYWAY, a few months ago, I started seeing this being pinned all over: 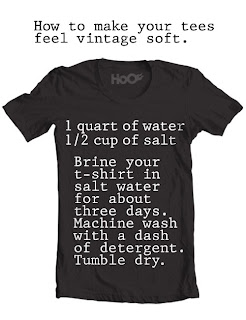 I was intrigued, I admit.  I have a thing for t-shirts.  One of my first jobs as a teenager was doing graphic design for a t-shirt printer, and I still make t-shirts.  I am a sucker for a good t-shirt, and as a result, I have a lot that are too big or too stiff or whatever.  I don't want to get rid of them because I still like them and think that the t-shirt fairy is going to swoop in my window and turn them all into comfy perfection.  I decided to try this shit out!

These are the t-shirts I picked out...  The Nicki Minaj shirt is too big, and kinda scratchy and stiff since it is mega-new.  I got it at a show, and the pickins were slim by time I got to the booth, but I bought a shirt anyway, and now I have this shirt I've worn exactly zero times.  The Funky Ass Records shirt I bought off Kutmasta Kurt a million years ago...whenever it was that Diesel Truckers came out.  I like this shirt enough that I will wear it, but it isn't that comfy.  The Melvins shirt I bought on Ebay even though it is two sizes too big, because I had the same one in the right size that was my favorite shirt ever, and I wore it into the ground.  I was hoping I could doctor this one up and maybe turn it into a Flashdance-looking shirt and be able to wear it.  The Ghostface shirt is just like the Funky Ass one, the size is fine, but it's a little scratchy for me to want to wear it often.  YUP, BORING T-SHIRT HISTORY.

First off, that Pinterest thing says that you should put a half cup of salt in a quart of water.  You are never going to be able soak anything in a quart of water.  So, I have a 2 gallon bucket, so I figured that there is 4 quarts in a gallon, so I had an 8 quart container, which meant I should put 4 cups of salt in there.  That is a lot of fucking salt.  I mixed up the shirt brine, put my shirts in the bucket, then I weighed the shirts down with a glass mixing bowl so they would stay submerged.  Then I put the bucket in the bathtub in the bathroom nobody ever bathes in, and left that fucker for three days.

In the meantime, I thought about whether it was going to work.  I tried to be optimistic, because I wanted it to work.  My girl Kathe pointed out that she thought the shirts were going to rot in the bucket, since your swimsuit will fall apart if you go swimming around in the ocean.  I saw her point, and hoped my shirts wouldn't fall apart, but that also made me more optimistic because maybe the salt in the ocean eats the lycra and stuff in the swimsuits, so it wouldn't be as dramatic with t-shirts.  I don't know.  I was just talking out my ass.

SO!  On day 3, I drained the bucket, washed the shirts, and dried them.  I took them out, and they were exactly the fucking same as when I put them in the fucking bucket.

THE END!!  hahahahaha ahhhhhhhhh.  I have no idea why I thought that Pinterest shit would work.  Lesson:  People can make a graphic out of whatever they want, it doesn't mean that it is legit. 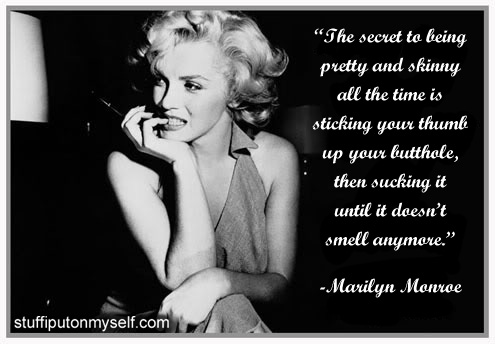 Email ThisBlogThis!Share to TwitterShare to FacebookShare to Pinterest
Labels: clothes