This is the new crud on the scene.  Kinda.  I mean, it's been around for awhile, but the pedestrian makeup brands have recently started cranking them out, and people write me about them all the time.  I mentioned them once before, then wrote a little mini thing about them, but still people wanted me to talk about them, so I thought I would do a post about them today.


So, BB cream was originally made 50 years ago, by a dermatologist, for her patients to use after they had procedures done.  Like, she would blast their faces with lasers and scrape them off or whatever, then give them some bb cream to put on afterward, so they didn't look like a monster.  Eventually, people in Korea started using it for shits and giggles, and it got mad popular, and now here we are, talking about it.

BB cream is basically an all-in-one product.  There are a lot of different ones on the market, and the all-in-oneness varies from product to product.  One might have SPF and moisturizer and anti-aging ingredients, plus the tint to cover up with.  Another one might have the tinted coverup quality, but have SPF and anti-acne ingredients.  You get what I'm putting down...  The idea is, you slap it on, and that is all you have to put on.

Once bb creams got popular in Korea, a bunch of cosmetics companies decided to jump on. Fancy expensive Sephora companies, regular Walgreens makeup companies, blah blah... A lot of these bb creams don't serve as many purposes, and seem kind of faddish, and some of them seem to not know what a bb cream is supposed to be.

NOW, I am going to show you the differences between a korean bb cream, which is actually what a bb cream is supposed to be like, a plain tinted moisturizer, and a new-fangled bb cream that I picked up at Giant Eagle. 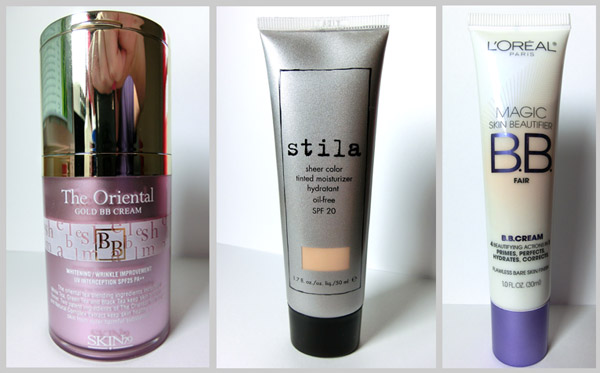 Here we have the dudes I'm going to write about:  Skin79 The Oriental (I didn't name it), Stila Sheer Color tinted moisturizer, and L'Oreal Magic Skin Beautifier BB (I know that one is amazing, because it says MAGIC right there on the label.)

Skin79 The Oriental: This is my go-to bb cream.  I like the color of it, it is functional, and it doesn't break me out.  I don't wear it every day or anything, just when I have to drop my kid off at preschool at 9 in the morning and don't want to look like I just rolled out of bed and put sweatpants on (I actually just rolled out of bed, put sweatpants on, then washed my face and slapped on bb cream.  BIG DIFFERENCE.)

The label on this guy claims it is brightening, firming, whitening (cause I surely need to be whiter), and it has SPF 25.  I don't believe that anything I put on my face is going to do anything but moisturize, and it does that pretty well.  I still look as dull, slack, and dingy as I did before I started using it.

The bottle is nice, feels fancy.  It has a smell to it, kind of floral/tea smelling.  Doesn't smell like shit or anything, it's alright and the smell goes away after you put it on.  The dispensing thinger is pretty sweet, you push it down and it squirts out the hole in the top. 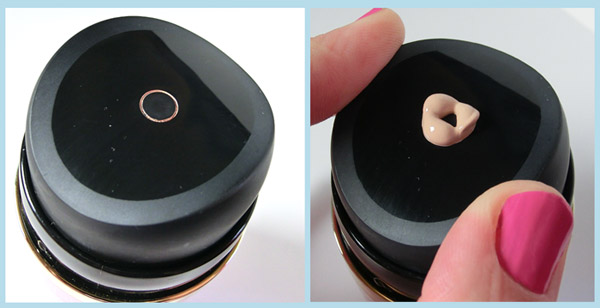 Look at it.  I told you it would do that.
One thing that this bb cream has that I haven't seen with others is the blush stuff.  The cap has a cap (pretty meta), and the cap's cap has some cream blush and a little mirror.  The blush is the color of Pepto Bismol.  They say you can use it on your lips or cheeks, but wearing it on your lips makes you look like you were pigging out on Necco wafers.  As a blush, it is not my favorite.  That's not a big deal to me, though, cause I bought it for the bb cream. 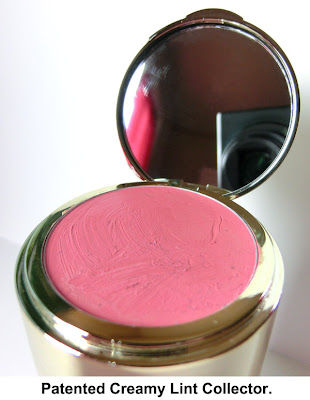 At this point, I am going to show you this little pic of a close-up of a spot on the wrist area of my giant arm tattoo.  It is going to seem arbitrary, but once I explain that I am going to rub some creams into that area to show how much it settles into your pores and what kind of coverage these creams have, you're going to understand.  See?  I explained it and now you understand!  Refer back to this if you forget what this spot looks like without being creamed up... 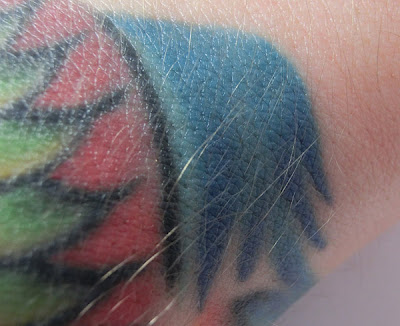 HOW THIS CRAP GOES ON: 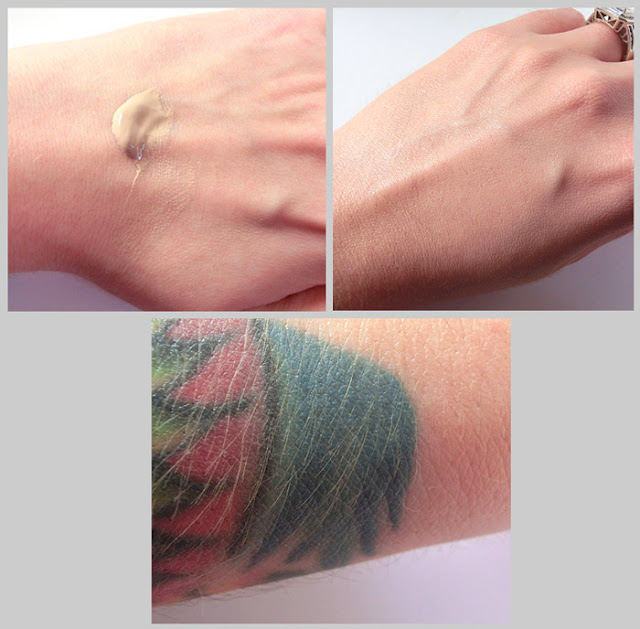 STILA SHEER COLOR:  I have a troubled relationship with tinted moisturizer.  I just can't find one that isn't too dark and doesn't break me out, and this one is no exception.  It is mad yellow and I never wear it because it gives me zits.  Let's compare this crappy garbage to the bb cream!! 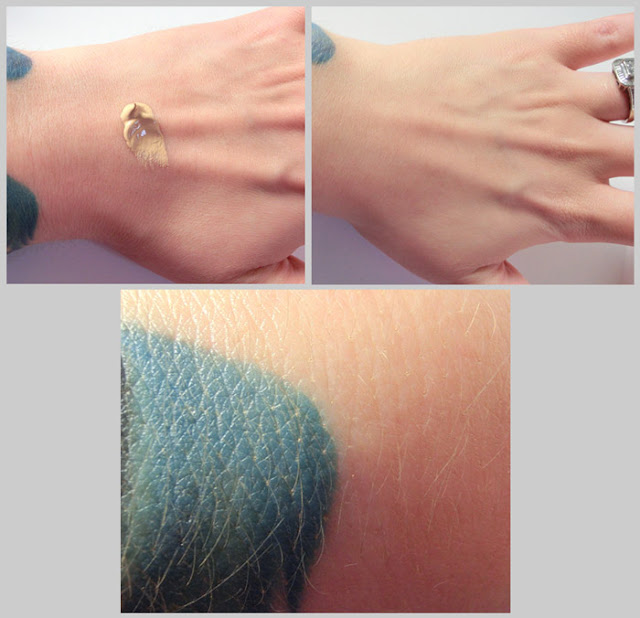 OKAY, this stuff.  Out of the tube, the texture is thick, but not as thick as the bb cream.  It rubs in fine.  You can see in the pic of it rubbed into my hand that it is pretty yellow, and you can see the line of demarcation halfway up my pinky where the yellow stops.  Gross.  In the closeup of my tattoo, you can see that it fills in all the pores on my wrist.  This is probably part of the reason it gives me zits.  If you are a person who is a lot yellower than me, who is also immune to zits, this shit might be a dream come true.

L'Oreal Magic Skin Beautifier BB Cream:  Real talk, L'Oreal doesn't know what the fuck BB cream is.  This is what I was talking about way up there when I said that a lot of the newer bb creams that are popping up everywhere don't have the multiple-product-in-one-bottle aspect, or even know what the fuck is going on.  Also, that link to it is overpriced as hell.  I don't think I paid more than $10 for it.

I picked this up at Giant Eagle or something, because I knew I was going to write this post at some point, and I wanted to throw one of these fuckers in there.  L'Oreal doesn't think that "BB" stands for "blemish balm" (which is supposedly what it stands for).... L'Oreal thinks "BB" stands for "BEAUTIFYING BEADS." 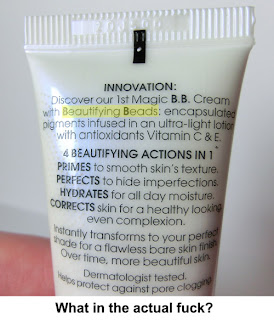 Apparently, the function of this stuff is smoothing texture, hiding imperfections, moisturizing, and evening out your complexion.  3 of those sound an awful lot like different ways of saying the same thing, and it kind of sucks as a moisturizer.  Also, NO SPF.

The thing is, aside from the fact that they can't tell their ass from their elbow, and they think i am stupid, I kinda like this stuff.  It's not bb cream, but I like it pretty well.  This + a little concealer on your spottier spots, and you look pretty good with a matte finish, and it doesn't look like very much makeup.  I am conflicted, because this is stupid magic talk and hopping on a bandwagon that it doesn't get, but I like it at the same time.  Oh, well.  Let's continue... 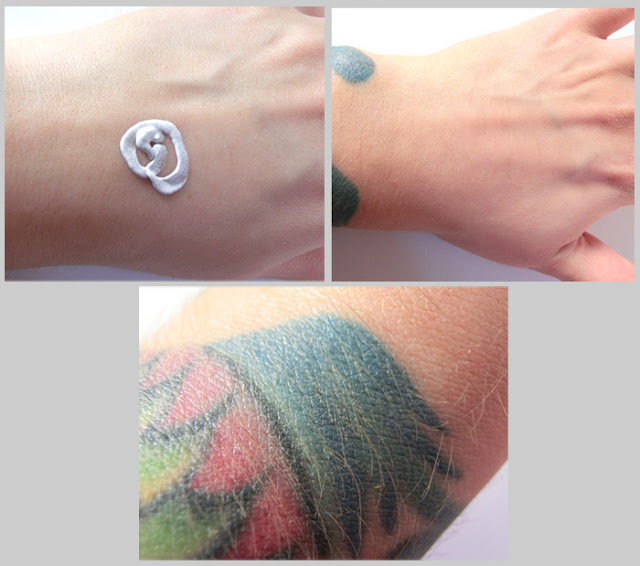 So, you can see, first off, that this shit comes out of the tube WHITE, and it has little grey gritty pieces (the beautifying beads, no doubt.)  You rub it in and the beads do whatever they need to do to disappear, and you get some light matte color.  In the close up, you can see it collecting in the texture of my skin a little bit, but I had to zoom in closer to see that.  It definitely dulled the blue of my tattoo, so the color payoff is decent. 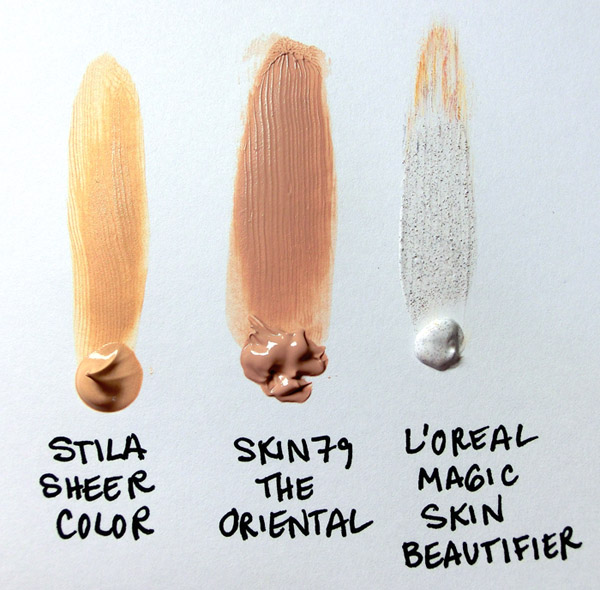 Here, I got a piece of paper and put a little plop of product and smeared it, so y'all could see the differences in texture up close.  The Skin79 bb cream is a lot thicker than the Stila tinted moisturizer, and has a lot more coverage.  The L'Oreal, I don't know what the hell that stuff is doing... some kind of party trick that doesn't have anything to do with the other two products.  You can see the white stuff, and the gritty, grey stuff.  You can also see how, when you rub the beads, they seem to pop and streaks of orangish and yellowish tint come out.

Here is a little closer, to better see what is happening up there... 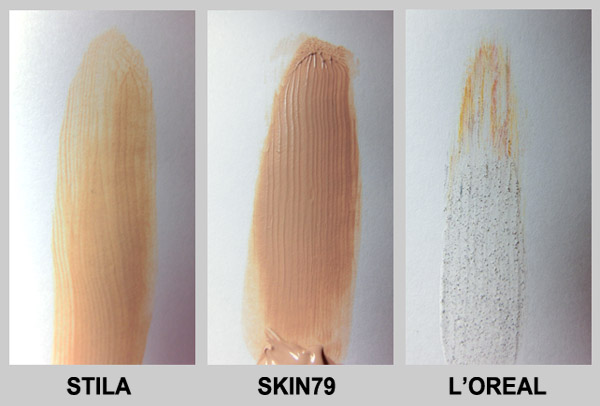 IN CLOSING:  Try bb cream if you think you'd like it.  It's not going to change your life, but it's not terrible.  I think of it as what I wish tinted moisturizer was.  It is good in a pinch, when you need to slap some stuff on your face to take your kid to school or let the plumber in the house.  Get a Korean brand, because they are legit bb creams, and they are not super-overpriced like a lot of the newer ones.  Also, you might want to get a sampler of a couple different kinds, because the color selection is sometimes crappy, and certain kinds might not have a color that looks good on you.

The L'Oreal stuff, you can try it if you want.  It's nothing like bb cream, and you're going to have to put on all your other face stuff and SPF before you use it, so it's not any more convenient.  However, I do like it more than the bb cream because it is not greasy at all (AKA the moisturizing claims are B.S.) and it looks pretty good alone, and plays nice with other makeup instead of making your face look like a dipped and breaded chicken cutlet.  It is still the Ralph Wiggum of bb creams, though.