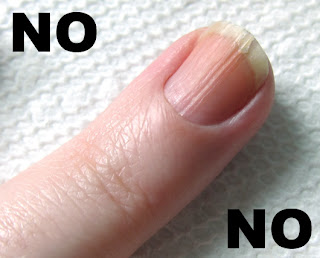 My nail issues are well-documented.  I'm basically a recovering cannibal.  I've had a pretty good handle on it for the past couple years, but the million years I spent eating myself resulted in some pretty funky ridges in a couple of my nails.  Most of them are just minor, and polish will cover them.  My ring finger on my left hand, though, was apparently my favorite one to eat, because it has a pretty terrible ridge, and my nail will always break down the ridge.

Recently, I cut my nails down and grew them back so I could get rid of some of the staining and a couple spots where I picked polish and shit was a little peel-y.  I finally have enough nail to paint, and I noticed that my ridge broke.  Usually, I will just cut my nail and file it down, but this one ripped to the quick, and I wanted to paint them and be glamorous instead of having farmer hands for another week or two.  So, I'm going to show y'all how I fix my broken nails.  It's pretty easy, and it's a good trick to be able to pull out of your hat.

OK, so here is my busted-ass nail.  I will go a long time without it ripping like this, but sometimes it just does it over and over.  I think it happens more when my nails are dried out.  ANYWAY, it's annoying.  I usually will patch my shit up with a teabag.  It's easy, cheap, and it will last until you can grow your nail out, as long as you use non-acetone to take your nail polish off.  WATCH ME DO IT!!

Here is my teabag.  It doesn't matter what kind you use.  I used this one because I don't like this kind of tea.  They sell silk wrap thingies at Sally's, but those suck and the teabags actually work better and are easier to use.  !!!!NOW!!!!  I cut the teabag open, and dump the tea out.  Then, I cut a little square of the bag, and trim trim trim trim trim until it is the same size and shape as the nail that's broken.  If you fuck up, just start a new one... there's plenty of teabag paper to fuck up about 20 times. 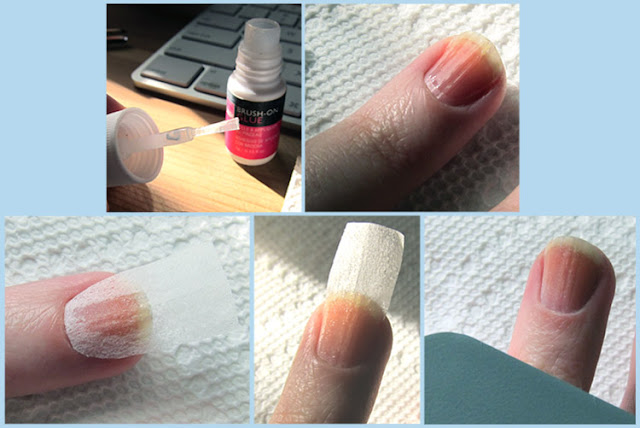 Next, I get my nail glue, preferably the kind with the brush.  The brush makes it easy to just put the glue where you want it, and I think it might dry a little slower so I don't glue the brush to my finger, since I am a moron like that, and I get a couple more seconds to put my teabag down.

I put some glue on my nail, a nice spot in the middle. just enough to arrange my teabag and have it stay.  I use an orangewood stick to press it down.  Now, I paint nail glue over the teabag, like if I was painting my nail.  The glue will soak through the bag and stick it down all the way, all over the nail.  Make sure you don't have any bubbles, because they can end up looking like pits at the end.  Let that fucker dry all the way.  Once it's dry, I file the extra teabag off, kinda like a Sally Hansen nail strip.  I buff it with all 4 textures on a 4-way buffer until it feels nice and smooth.  You might be able to see some of the fibers in the paper, but if you buff it smooth, you won't be able to see it once you polish your nails.

Then you polish your nails (that "Violetta" PopBeauty nail polish is the most lovely thing ever, by the way.)  Now I am completely beautiful and perfect and happy inside, and everything is always going to be great and nobody is ever going to die.