The Post Where I Find Out I'm a Pervert

HELLOOOOOOOO, PARTY PEOPLE.  What's up with you?

I've been working a metric fuckton.  It happens.  When I get swamped, I usually refer to it as "in the hole," like where'd they'd put you in prison for being an asshole++.  I've been in the hole for about 6 weeks now.  Usually when I'm in the hole, I will just put whatever music on my iTunes that I have the most of, so I don't have to stop and change the music as much, and I've been on a Dinosaur Jr binge for this particular time in the hole.  I've listened to every single Dinosaur Jr album, from 'Dinosaur' to 'I Bet on Sky,' plus all the b-side albums and imports and live albums and J Mascis solo albums.  According to my iTunes, I've listened to all of them 31 times, which works out to about 385 hours that I've been in my office by myself.  GOOD TIMES.  At least I know that when I am on my deathbed, I won't have regrets that I didn't spend enough time alone in my office.

I've mainly been getting my comics up to date ("up to date" meaning "stocked up for the foreseeable future."  Y'all know your girl puts her back in it.)  Aside from that, I've been busting my ass getting my polish site redesigned and making polish and all the thrilling stuff that comes with getting a new project rolling.  I'm all done with that now, though, so you ought to check it out if you haven't already!  I think it looks pretty good, and I think all the polishes I made look good.  Usually when I make polish, I will make about 9 million colors and test them all, and then chuck out 99% of them because I am picky, so the cream that rises to the top tends to be pretty legit.  Also, my nails are so fucked and soft that everything I buy chips on me in about 5 minutes.  I test everything and I don't put stuff on the list of polishes to make unless I can keep them on, unchipped, for at least a couple days, which is a miracle if you consider that I spend all day typing and packing boxes and making nail polish.  HIGH FIVE, ME.  WAY TO GO, ME.  YEAH. 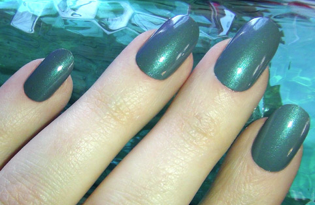 After the last hair removal post, I ordered a Braun Silk-Epil epilator thingy.  I picked this one because it had good reviews, and because you can switch the head out and use it as a regular shaver, which I thought would be a good way to make sure I didn't totally waste my money when I decided that I didn't like epilating.

Okay, so I got the epilator.  I just don't know how I can weave a story around using it to make it more intriguing or whatever.  I charged it up, then I put off using it for a few days, and then I bit the bullet and did it.

If you don't know what an epilator is, it's basically a ton of little spinning tweezers that spin around and around and rip all your hair out.  I am pretty hard, I am not a puss about things hurting.  I have vast swaths of my body tattooed, I've had catheters and injured my knees and ankles and I can just ignore shit like that and let it slide.  Don't even get it twisted and think I am being hyperbolic when I say that epilating fucking sucked with the power of 1000 suns.  Damn.  I have a tendency to cuss a bit (no shit) but the epilator hurt so badly that I did not cuss when I was using it.  It was so painful that I was hollering pleas to the Virgin Mary and Ned Flanders-style curses, nothing that would have actually got bleeped out if someone made an reality TV show about me epilating.  Strange.

I got a patch about as big as a Hershey bar done before I had to quit, and then I was spanked for the rest of the night from all my fight-or-flight responses firing off like crazy.  Pretty stressful!  I think the worst part of it was the pain (duh) coupled with seeing the epilator flinging ripped-out leg hairs all over when I was using it.  Pretty grody.

Of course, it hurt so badly it was actually comedic, so I got Drew to let me make a movie of me epilating his leg.  He has enough hair, he can spare some for the sake of mirth.  Please note how melodic the epilator is.  Beautiful.

After the epilator adventure, I was going to try waxing, but I was REALLY hesitant after that horrible hell-nightmare.  I felt victimized by epilating, but I had to wax for the sake of this blog (damn, my life its totally fucked.)

I went out and picked up a Bliss Poetic Waxing kit, again, because it seemed to have pretty good reviews.  If you've never seen/used this, it's basically a microwavable mug with wax in it, and some useless cleanser stuff and some azulene oil, which is that blue oil that comes with basically every waxing kit ever.

I tried it out on Easter evening, because it seemed like a good way to celebrate the resurrection of Christ.  I microwaved it, which took a lot longer than the packaging would suggest, then I went to town.  There were a few awkward moments, when my 4 year old daughter was asking me what I was making...

"Wax," I said.  I wanted to be vague in hopes she'd not inquire further.
"Why you mating wax?" (That isn't a typo, she pronounces Ks like Ts.  I'm gonna type like she sounds.)
"Because I am going to put it on my leg."
"Why you putting wax on you leg?"
"....Because I am going to use it to rip the hair out of my leg."
"Ohhhhhh.  Why you dohing to rip the hairs out of you leg?"
"Because society enforces some fucked-up gender norms, and one of them is that women should be hairless even though they grow hair.  Sometimes women do dumb shit to go along with those dumb gender norms, and think it will make them look better, but it hurts and it doesn't actually make them look that much better."
"Ohhhh.  Wax my lehd!"
---END SCENE---

Okay, so here is the part of this post where I find out that I'm apparently a pervert.

I put this wax on my leg and I rip it off and it is life affirming and fills my heart with joy.  I try it again, in case I was just having some kind of weird shock reaction, and it still pretty much rules ass.  I kept waxing my legs until it was time for bed.  Here is the part of the post where I tell you to not buy that Bliss Poetic Waxing kit because there is NOT enough wax in that mug, and it is a pain in the ass to keep going to the kitchen to heat the wax back up, and it is too expensive.  I resorted to reheating used wax, which wasn't that awesome.  I shouldn't have to do gross shit in order to get my money's worth out of some kind of fancy product.

Obviously, I went out to Sally a day or two later and got one of their little $20 wax crockpots and a couple 14 oz. tubs of wax.  You know, because I am a pervert and I love sitting around ripping all my hair out.    That whole set up was less than the Bliss kit, and I can wax the whole universe and not have to use the microwave even once.

For the sake of being informative, I have been using hard wax, which is apparently different than the other kind of wax, and hurts less since it doesn't stick to your skin as much.  All I know is that waxing tickles every gross part of my psyche that wants to dig out an ingrown hair or stare at my Biore strip or pick a scab or whatever.  It's exhilarating.  Ripping it off is how I imagine it would feel to get a goal, or slam dunk or something if you were one of those sports-doers.  I'm all like "rip," then I'm all like YEESSSSSSSSSS!!!!  I don't think I've loved something like this since the first time I smoked a cigarette, only I will never have to quit waxing for my health and then spend the rest of my life thinking about it longingly.

I will update you if I wax so much that I only have pubes left, and end up picking HOMEGROWN BRAZILIAN from this Choose Your Own Adventure of bodyhair removal.