You know what cheeses me off?  Blowing money on makeup stuff, and having it be really cruddy.  It's always a treat to buy some fancy thing, and when you spend decent scratch and the thing you bought is basically worthless, it is pretty insulting. 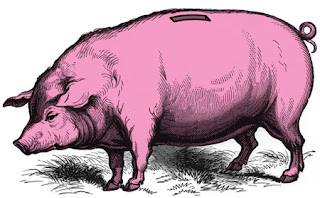 The Pig wants you to have nice things.  The Pig does not want you to waste your money.  A lot of times there will be a product that seems to have a lot of buzz, or seems to be pushed pretty heavily by retailers or by other makeup blogs, and they just aren't that good.  That's when I will step in to give you a brutally honest take on things (brutally honest is just something I do), then we'll take whatever money you might have paid for that overhyped product and feed it to The Pig.  As this site progresses, we'll be able to see exactly how much money we've saved by not buying things that don't live up to their promises, or have cheaper alternatives.

***This is about treating yourself to nice stuff, but being savvy enough to recognize when you should save your money for something else.  DON'T BE A MARK.  Being a mark never looks good.***

Let's try this out...  First up is a product that I don't like (obviously.)  It is mega-hyped, "winning" all kinds of customer/reader choice awards (whatever those are), and seems to have a lot of people giving it props. 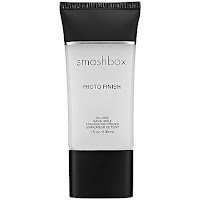 This is Smashbox Photo Finish Primer.  According to the manufacturer:
"Create a perfect canvas for foundation application with this silky, lightweight blend of vitamins A and E, Grape Seed extract and Green Tea. Worn alone or under foundation to increase longevity, our best-selling primer helps reduce the appearance of fine lines and pores for flawless skin with a velvety-smooth finish."

Basically, it makes your skin feel a little soft like you applied silicone to it, and makes it look a little matte.  Fair enough.

Here are my complaints...  First, whenever I've used it with makeup over it, the makeup doesn't apply as well, and will sometimes pill up when I touch my face.  Isn't that the opposite of what should happen with a primer?  Second, it is expensive as hell, at $36 for a full-sized tube at Sephora.  There is also a larger tube that retails for around $59.95, in case you prefer to get royally screwed up the ass, instead of regular screwed up the ass.

OH, and it makes me break out.  There's that, too.

ANYWAY, here are the ingredients for this stuff...

All of the extracts at the end might as well be imaginary...  Anything stacked at the end of a list of ingredients like that are really tiny, tiny amounts (ingredients are listed in order of largest amount to least.)  Aside from that, vitamins and extracts don't really have a topical effect, aside from moisturizing.  Your skin can't really absorb nutrients or antioxidants in any kind of useful way.  If it could, people would lay around with vegetables all over themselves, absorbing nutrients and antioxidants while they ate Snickers.  Even if you could, the amounts listed wouldn't do you any good, really.  It's not going to hurt you, but don't expect them to do anything.  So, Retinyl Palmitate (vitamin A) and beyond aren't really worth discussing.

The rest of the ingredients, aside from the Ethylhexl Salicylate (sunscreen) and Silica (inert filler or bulking agent) are just variations on silicone.  The main ingredients are basically the same as silicone sex lube, which is slippery and won't really help makeup stick to your face.

So, why is this stuff so pricy?  Because a big price tag makes you think it works?  It's not because it's anything special.

Aside from all that, there is a growing number of ladies online who are talking about forgoing the expensive, Smashbox-style silicone primers in favor of Monistat Soothing Care Chafing Relief Powder Gel.  Look at the ingredients for this stuff:

It's almost exactly the same thing, without all the extracts that don't even do anything.  PLUS, it's $6. I can spend $6 on something and not like it, and I don't even care.  I'm not mad at anyone, I don't feel had.  90% LESS THAN THE OTHER STUFF.  What is in the Photo Finish that is worth $50?  Some kind of weird psychoactive drug that makes you black out and throw money away, apparently.

LET'S FEED THE PIG, GUYS!!  I am going to call this $59.95 for The Pig, since that is the price of the Smashbox Photo Finish that has roughly the same amount of product as the Monistat.  Let's do this! 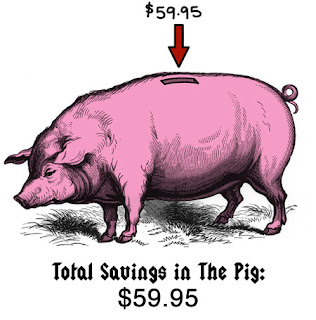 Special thanks goes out to my old man, the chemical engineer, for his assistance parsing those ingredient labels.
Posted by Natalie Dee at 8:20 PM