How Much to Plaster On

I got a few emails from people in the last week asking about make up (duh.)  Specifically, they have been asking how much to put on.  Like, when do you stop putting it on?!?

I thought I would take a few pictures of different levels of made-upness, and tell you what I had on, and where I would go if I had that much makeup on!  Let's do this! 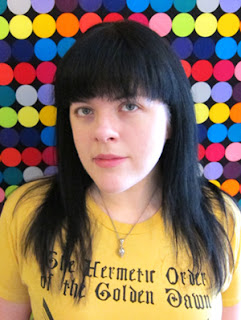 LEVEL ONE:  Little to no makeup.  I know, I'm so brave, right?  I'm not going to get into how dumb it is that women get so worked up about showing their faces, when it's totally 100% fine for dudes all the time, but that's neither here nor there, and this is a makeup blog.  This is my regular human face.  The only thing that is making me feel weird about these pics is that I don't have glasses on, it makes me feel like I have little teeny eyes in a big old face like a cartoon character.

WHAT I HAVE ON/WHERE I'M GOING:  When I get done up to this level, I put on some tinted moisturizer or bb cream, and Vaseline or some other kind of lip balm so I don't look dried out.  Here I have Cerave moisturizer, Skin 79 Oriental Gold BB Cream on my problem areas, and some Vaseline on my lips.  This is what I would have on if I was walking to the corner to buy mustard or Arctic Zero or a Diet Coke, or if I was going to get drive thru pho or something.  If I was going to the gym, I wouldn't even do the bb cream, because I get paranoid thinking about tinted stuff going in my pores when I am sweaty. 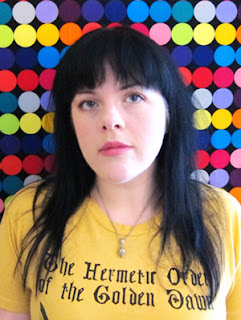 LEVEL TWO:  Light makeup.  I look like maximum Monica Lewinsky in this picture.

WHAT I HAVE ON/WHERE I AM GOING:  To get done up to this level, you start out with the bb cream or tinted moisturizer, then go the extra step of touching up spots with concealer if you need to, then put on a little translucent or silicone-style powder, a little blush, and some mascara.  I will also use just a teeeeeeeeny bit of pearly cream eyeshadow in a light neutral color, and just rub it in so my eyelids have a tiny bit of sheen to them.  In this picture I have on the same bb cream as level one, plus Make Up For Ever Full Cover concealer on a couple areas, Urban Decay Razor Sharp powder, Physicians Formula Happy Blush in Pink, Benefit BadGal mascara, Make Up For Ever Aqua Cream in Pink Beige, and MAC Tinted Lip Conditioner in Fuchsia Fix.  This is what I would wear on an extended errand run, or you could wear your makeup like this if you had a date with one of those assholes who say they don't like girls who wear makeup.  (NOTE TO THAT ASSHOLE: shut the fuck up, nobody asked you.) 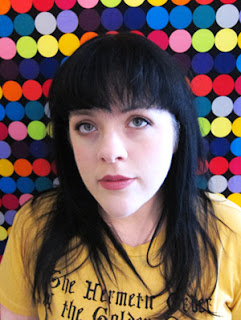 LEVEL THREE:  Basic Fancy.  Also, I'd like to welcome this weird camera angle that makes me look freaky to the party.  Yeah!  Get right up in my face til it looks like a fisheye lens, I love that!

WHAT I HAVE ON/WHERE I AM GOING:  Phew, this is, like, totally different than levels one and two.  I'm just gonna get right to listing what I have on....


This is basically just a matte nude eyeshadow look w/the full foundation face + lips + cheeks + all that. I would wear my makeup like this to a casual party, or out to dinner with my husband and kid, or just because I feel like it because buying makeup is a waste if you don't wear it.  This is also basically how I did my makeup in the two videos I posted recently. 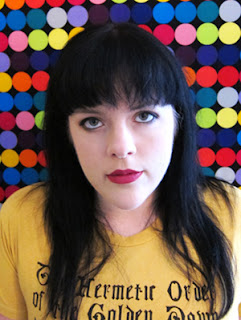 LEVEL FOUR:  Fancy Plus.  Probably too much makeup.  Also, visibly irritated by getting picture taken over and over.

WHAT I HAVE ON/WHERE I'M GOING:  Everything in this pic is the same as the last pic, EXCEPT!!!
If I was made up like this, I would probably be going on a fancy dinner date with no toddler, and I would probably also not be wearing an 8 year old Aleister Crowley t shirt.  Or maybe I would.  I don't give a fuuuuck.

OKAAAY!  SOOOOOOO!  That is my standard breakdown of made-upness levels...  Obviously, there is a million ways of switching things up.  I like lipstick, so I tend to do nude eyeshadow more, but if you like eyeshadow, you could experiment with differing amounts and application techniques and do nude lips.  Or do bright lips and crazy eyeshadow and just stand in your yard until Bret picks you up in the Rock of Love bus!!

Also, I know that was a lot of links, but I got a million trillion emails from people asking me to be specific about what I was using, and I thought that this post demanded that I be specific.  There are a million drugstore products that could do the job of just about any department store product I listed here (except maybe the Razor Sharp, I haven't found anything like that at Walgreens yet.)  Don't buy the expensive stuff if you're not gonna use it all the time.  That Guerlain lipstick I listed is like $30, but I wear it all the time, and I will use it until I am scraping the inside of the applicator to get the last of it out.  If you don't wear lipstick that much, I know L'Oreal has a lot of lipsticks in similar colors, and the formula is similar as well, so you can get the same kind of thing for tons cheaper if you are a casual lipsticker.  Also remember, black eyeliner is black eyeliner, black mascara is black mascara, nude eyeshadow is nude eyeshadow.  I'm just telling y'all what I used because you asked, not because this stuff is magical or anything.  I used the two Naked palettes because they are what I have, and I got them with my AmEx points, not because they are OH MY GOD THE HOLY GRAIL OF EYESHADOW THAT YOU MUST SPEND $100 ON!!!!!!  Maybelline and Revlon have lots of nude palettes that are perfectly functional, if not more so, since they don't give you a ton of colors you might not use.  I don't care if you use washable Crayola markers to do your face if you look good.

ALSO, to all the ladies who ask "What about glasses?!?  Can I put eye makeup on with glasses??"  I would wear my glasses with ALL of these examples.  The only thing that would keep me from wearing my glasses would be if I was wearing fake eyelashes that would knock against my lenses, or if I wanted to wear sunglasses (I do contacts with those, since I don't usually have Rx sunglasses.)  I just don't think wearing glasses clashes with makeup, or whatever y'all think the issue might be.  You might not want to do blue glitter, cut crease, YouTube tutorial craziness and wear glasses at the same time, but regular makeup a lady would wear to do normal person things isn't going to look weird.  If you look weird with makeup and glasses, it's probably because you put so much makeup on that you look like you're gonna work the pole.  Ladies on the pole tend to take their glasses off before their pole dancing routine.  You know, for safety or whatever.  You don't want to be hanging upside-down up there, have your glasses fall off, then plant your butthole on them when you land in the splits.  I know you feel me on this.