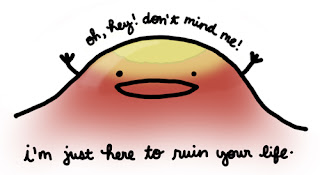 I had a kid a few years ago, and it was basically the worst pregnancy ever, and I was in the hospital for weeks and almost died.  Obviously, I am gonna be a one-kid kinda lady, since the odds are that the same thing would happen again, and I'm not a fucking dumbass.  You know, the organ failure and potential blindness and the edema so bad it felt like I was wearing a snowsuit and DEATH just convinced me it's probably not a good idea.

The worst part of being pregnant, though, aside from all the near death, was that it completely destroyed my skin.  When I first got pregnant, I read all kinds of ladies being like OHHHHH IT IS SO GREAT MY SKIN IS WONDERFUL AND IT JUST GLOOOOOOWS!  My skin shit the bed.  Before I had a kid, my skin was awesome.  No pores, no marks, it looked like vanilla ice cream.  No problems at all.  When I got pregnant, I got the worst, painful, deforming cystic acne.  Oh my lord, just thinking about it is bugging me out.  It was terrible.  RED!  BUMPY!  Not like acne-bumpy, like Sloth-bumpy.  The biggest cysts that would never come to a head, and if they ever did, they'd be full of a half cup of gross zit stuff.  Not trying to be nasty, just trying to paint a picture for y'all.  This was beyond what I had ever seen on myself, of course, but I'd never seen a person out in the wild who had skin as completely fucked up as mine.  I just couldn't deal with it.

When you are pregnant, there is basically nothing you can do about breakouts (not that any of the stuff you can't use that will work.)  No salicylic acid, no benzyl peroxide, no nothing.  You just get to sit and watch your face get deformed in slow-motion.  It's a nightmare.

Once I had my daughter, it took a really, really, really long time to get it sorted out.  I still had breakouts that were pretty bad for a year or so afterwards, and I still get breakouts once in awhile.  They are quaint compared to what was happening before, though, so it's fine.  I can deal with it.

I get a ton of emails about skincare and acne in particular.  I thought I would share what I have found that has helped the most in terms of getting fewer breakouts, and managing the ones I do get so they are not a crisis:

GET YOUR BIRTH CONTROL SORTED OUT:  I have always taken Ortho Tri Cyclen, which is supposed to be pretty good for breakouts, but my hormones were all fucked after I had a baby.  I switched to a mono-phasic, no-period birth control pill for a few months, and I think it just reset my hormones from the babymaking/birth control dosage fluctuation roller coaster they had been on.  Holding my birth control dosage steady for a few months seemed to give my body time to sort itself out.  I am not a doctor, obviously, but doing this for a few months improved my breakouts by 75%, even though I switched back to my old pills after 6 months or something.

EXFOLIATE:  Retin A works okay for this, but I think it is important to do it in a way that is not so irritating.  I was having problems with dryness and eczema when I was using Retin A, so I switched to a glycolic acid cream cleanser (I use MD Forte III, but you need to get used to a lower level before you can work up to that.)  This is something you apply dry, let it sit for a couple minutes, then rub a little water in and wipe it off with a wash cloth before you rinse it all the way.  It is really awesome for exfoliating, and is moisturizing, so your face is in a much better mood.  This isn't going to cure you forever, but your skin will be so soft and happy that the zits that might pop up are smaller and go away a lot faster, and aren't as inflamed.  Also, speeding up the turnover of skin cells will make your red spots fade faster.

MOISTURIZE:  I know y'all are like THAT'LL GIVE ME ZITS.  No it won't.  If your skin is dry, it will produce more sebum to compensate, and blocked sebum ducts are what give you zits.  Combine increased sebum production with dry, flaky skin that isn't exfoliated, and you are asking for a breakout.  Also, if you have zits you are trying to cover up, it is a lot easier to put makeup on a zit that isn't all dry and flaky.  Makeup looks terrible on dry flakes, and your coverup job will look more like a giant arrow that is all like LOOK AT THIS GIANT ZIT COVERED IN SHITTY MAKEUP!!!!  Use the most moisturizing stuff you can!  There are a lot of non-comedogenic oils out there, and they are awesome in how moisturizing they are, and also they are only one ingredient, so they will not irritate your skin with some commodified industrial chemical.  I moisturize with something I refer to as "mashed potatoes." (I do this in the morning, and in the evening on top of a tiny bit of MD Forte Facial Cream II.)
******************************************************************************
MASHED POTATOES RECIPE
Mix it up and smear it on!  If you have too much, smear it on your neck!  If you still have some, do your décolletage!  (Hint: if you have a beauty routine for your décolletage, you are officially fancy.) 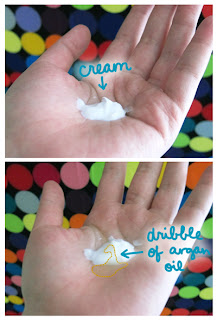 If your hormones are mellow, your skin is exfoliated and nice and moist, putting a little topical salicylic acid or benzyl peroxide isn't going to be as irritating.  I'm not saying it is going to WORK, but it won't trip your face out real bad.

Whenever I think about putting a bunch of drying, tingly acne stuff on my face, I think back to when I was talking to my dermatologist, and I asked him, "So, I know I am going to get hormonal breakouts, is there any wash or mask or anything I can use so it isn't as bad?" and he said, "No."  It's gonna happen regardless, people!

Most beauty/skin care products DO NOT WORK.  If over-the-counter acne treatments worked, nobody would have acne.  The best course of action I've tried is to BE NICE TO YOUR FACE.  If you're gonna break out, you're gonna break out, and all you can do is make sure that your skin is not already tripping from torturing it with a bunch of drying stuff that isn't going to work.

I thought this post would be a perfect chance to feed The Pig again!!  Since we're talking about skincare stuff, and argan oil in particular, it's time to call out Josie Maran on the heaping buttload of bullshit she is trying to pull on us!!

Argan oil is pressed from pits of the fruit that grow on argan trees in Morocco.  It's like any other pressed oil.  When you buy it, it is usually labeled as "100% pure" or something similar, unless it is in an argan oil based product.  You just want the oil, and there are a million places that sell you 1 or 2 or 4 ounce bottles of it for roughly $7-8 an ounce.

Josie Maran, though, seems to think that the SUPER AWESOME JOSIE MARAN BRAND 100% ARGAN OIL is somehow different and more valuable, even though all of the oil from all of the brands are from the same trees in Morocco, and pure argan oil is pure argan oil.

She thinks you're a fucking dumbass.  She thinks you'll pay $48 dollars for the exact same thing as the regular $8 argan oil.  The bottles are even the same, aside from the sticker.  Josie Maran is selling you a fancy $40 label on your regular argan oil.  Maybe next year she will try to sell you Vaseline in a fancy tub for $89. 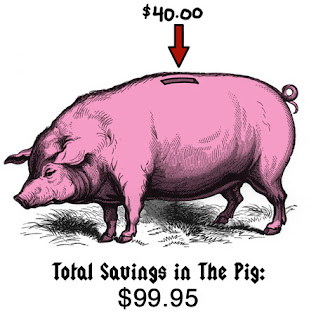