Last night I was doing Nona's hair after I gave her a bath.  Her hair is half wavy/half straight, so I was spraying some texturizer through it, and scrunching it up to get it to look more uniform.  I was using this stuff in particular: 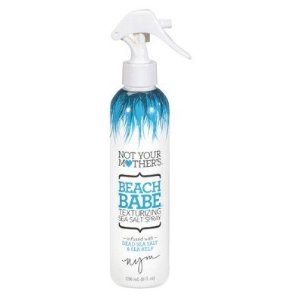 GUESS WHAT?  THIS ACTUALLY IS YOUR MOTHER'S BEACH BABE TEXTURIZING SEA SALT SPRAY.  WHAT NOW?  HUH?  WHAT NOW?!?  Now you look dumb.

I've been getting some emails from cats asking shit, so I'm gonna post about a bunch of different stuff in this post.  I hope you can keep up...

I've received about 98 million emails about bb cream after I made that post showing a few different ways of doing your makeup, with increasing amounts of makeup, blah blah blah.  Maybe you read it.  Anyway, I mentioned that I used bb cream in one or two of the looks, and everyone was all OOOOOOH BB CREAM.  So, here are my thoughts on it:

I think it's ok.  It's not the most amazing thing I've ever used, but I don't really have any complaints about it.  I like the Skin79 Oriental Gold because it matches my skintone pretty well, and it has the little bb cream blush that comes with it, but honestly I never really use that.  I like it because most tinted moisturizers I've used are either a weird color, or they make me break out, and bb cream seems pretty bland and does what I want it to.

Some people were all like WHY DO YOU GET A KOREAN ONE?  DOES IT MATTER?  I just get a Korean one because 1.) I've been using bb cream since before they started making it for the US market, so I found one I liked back when basically all of them were Korean and 2.) I like it fine and don't see a reason to stop using the one I like so I can use the ones they just started selling at Sephora for 2 or 3 times more.  Also, it kinda seems to me that the American ones are different maybe?  It's probably just me being skeptical since they are overcharging for it.  I guess I just figure that if they're overcharging, why wouldn't they make it sucky, too?  I don't know, don't quote me on it.  I like my bb cream just fine.  I've also tried the Dr. Jarts kind, but I didn't like it.  It didn't feel as good, and it was too dark for me.  I hear that there is more color choice now, but like I said, I just use the one I like.  I use bb cream, but I am not an evangelical bb cream user.  It's like tinted moisturizer, maybe with a little extra coverage.

Try it if you think you might like it, don't if you don't wanna.  Nobody's gonna die.

People also have been asking me about Bare Minerals/other mineral foundation.  This shit is not my favorite.  I don't like how it smells, I think it smells like a dusty library shelf or dirt or something, but not in a good way, like dirt in the rain or something.  Just smells dirty.  Also, it makes my face feel congested and dried out, and I think it makes my skin look kinda shitty and will sometimes stick in my moisturizer in a weird way that looks yucky.  Phew.  ANYWAY, it's meh.  I prefer to have a more satiny, moist finish to my makeup because that dusty matte look makes you look like you have a ton of shit on your face, but if it looks more moist, it looks less obvious.  Nobody looks like a floury biscuit naturally.

Basically the only time I wear this stuff is if I don't want to put makeup on, but I want to take the edge off my horrific countenance so I can walk down to the corner store for a soda.  I'll slap a little of it on just so I don't feel like Sloth.

BUT!  They have this Multi-Tasking stuff, and I use that more often.  I'll do my makeup, and if I have a spot that isn't concealing very well, or a zit that is going to want to slough all the makeup off, I pat some of this stuff on with a tiny brush to set my makeup on the bad spot.  Just a teeny bit on a particularly angry area, so the smell doesn't bug me, and I don't feel all dusty.  I use the "Well Rested," which I think you're supposed to use in your eye area, but I don't usually put stuff in my eye area, because I try to not cover up absolutely every little thing on my face.  I don't care if I have a little bit of dark circles or whatever, because I am a person and people sometimes have circles.  I know, I'm a renegade.

***TIME OUT FOR SOME PERSONAL MAKEUP PHILOSOPHY***
If something is an anomaly on your face, like a zit that is going to be gone next week, or redness from being warm or being dried out, or something temporary like a shiner or something, cover it up!  If it is a permanent part of your face, like freckles or the shape of your nose or something, leave it the fuck alone.  Start contouring shit and covering
up every little thing and you start looking like Cirque du Soleil.  Plus, having
facial features like freckles or a round face or a big nose make you look like you, and it's
charming.  I know people don't do "charm" much anymore, but still.

Lastly, I got a billion trillion emails from people about diet stuff after posting last week about nails, and mentioning that I had to bust my ass to lose some baby weight.

I am not going to lie to y'all, I have a tendency to gain weight like crazy if I am not careful.  I just work at home and am generally misanthropic, and that puts me at a disadvantage when it comes to calorie burning.  Also, my favorite things in the world to eat are rice, pasta, noodles, potatoes, bread and red meat.  Not a good combo for staying at a decent weight.

You need to find out the number of calories you need to maintain your current weight.  Anything in excess of that is too much, and you will gain weight.

If you want to lose weight, you just figure out how much you want to lose, and how fast.  Then you figure that you need to have a 3500 calorie deficit a week to lose a pound, so you cut 500 calories a day from your maintenance level to lose a pound a week, 1000 calories to lose 2 pounds, blah blah blah.  You don't want to lose more than 2 pounds a week, btw.  That's bad juju, and will make you feel shitty, then you'll eat a million cookies because your body will think you're starving.  OH, and if you lose 10 pounds or something, you have to redo the equation to figure out your caloric level, because that is gonna keep dropping the more you lose.

It doesn't matter what you eat, as long as you count what you eat.  You'll figure out that eating high calorie stuff just makes you hungrier because you can't eat as much.  But eat whatever you want, count it, and you won't feel like a pariah.  I eat pasta, and go out for ice cream, and get chinese food if I am in the mood, I just count it all.  Low carb, low fat, that shit just makes you feel like certain foods are bad and that makes your thoughts about food get all distorted, and then it gives you bad feelings about yourself if you have a cookie, then your bad feelings make you fall off your diet.

When you work out, try to build muscle, since that burns more calories than fat, so you'll be able to eat more.  Lift weights.  You're not going to get bulky if you're a lady.  Go to a ladies' bodybuilding competition and ask one of the ladies there if they got muscular like that accidentally, from lifting weights a couple times a week.  For a lady to bulk up to the point of looking all ripply like a dude, she has to dedicate her entire life to it.  That is never ever going to happen unless you want it so bad you never do anything else but work for it.  If you're a regular person and just lift heavy weights when you work out, you'll just build a little muscle so it's easier to lose weight, and you'll look a little better and be stronger.

When you work out, it should be hard.  If you're not dripping sweat, and you're not having a hard time talking, and you're not sore the next day (at least occasionally,) you're not working out hard enough.  If you're trying to change your body composition, you're going to be uncomfortable.  You do the sucky stuff a few times and suddenly it doesn't suck anymore and you have to find something even harder to do.  Rinse.  Repeat.

Lastly, have a reasonable idea of what you think you should weigh.  I don't want to be a size 4...  I am tall and it would look weird.  I don't really care how much I weigh, as long as I can wear a large in Marc by Marc Jacobs clothes.  I think that is a reasonable for me, and that is my high end of what I am comfortable with.  If I can't fit in that size, though, I have to start being hard on myself because if I don't, I will get depressed and that just makes me get fatter.  Maybe the size you think you should be is bigger or smaller, and that's fine.  I don't think you should feel obligated to be a certain size by society or whatever, and I think you can be happy and attractive at any size, but you should try to at least be at a weight and fitness level where you could rise to the occasion if you had to get away from someone chasing you, or help people set up sandbags against a flood, or run to call an ambulance for somebody or whatever.  You never know when you're gonna need to save your ass, regardless of how big it is.

I've got a bunch of emails, too, from people all like "Make a post about the red lipstick you have on!!" and "Tell me about what you use to dye your hair!" and "What is your skincare routine?"  What the fresh fuck, people.  If I get one more email from someone requesting that I write a post about something I already posted about, I am going to start busting knees.