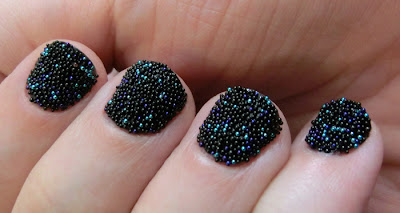 A while ago, I saw the Ciaté Caviar Manicure linked from somewhere (I can't remember where, sorry.)  I was intrigued but put off by the price... I saw it linked on some European site, so the slight priciness of the kit + the cost of international shipping was a bit much.


When I started this blog, one of the first requests I got was from a lady asking that I try it out.  I was still a little apprehensive about it, though, because the cost of shipping made it too much for a nail polish.


BUT!!  On Mother's Day, I made my family take me to Sephora (it's MY DAY, dammit, we're going browsing!!!)  While we were there, I saw they started stocking it, so I picked one up.  It was very much an impulse buy.  I like doing my nails, but I am not much of a "nail art" person.  It seemed fun, though, so I got it thinking it would look weird and gross, but it would be comedic and we'd all LOL our brains out before I took it off.

Here's the gist of it--  The kit comes with a nail polish (I got the black one, naturally), and a little bottle of beads.  You put down a coat of polish, let it dry, then put a second coat of polish on, one nail at a time.  Then you pour the beads on your wet nail and press them down before putting the second coat of polish and beads on the next nail.  It comes with a little tray and funnel, too, so you can just dump the beads back in the bottle pretty easily and it's not as messy as you would assume.


The first time I tried them out, I was pretty enthused!  I liked the look of it a lot more than I thought I would, and the application was easy and kind of fun.  Not bad!  The we started having problems.


The polish itself, it turns out, is VERY similar to the rubbery peel-off polish you would use on a toddler.  This stuff is NOT durable in the least.  The box suggests that one could wear their caviar manicure for up to 48 hours, but this is a giant steaming heap of mega-bullshit.  I put this on at about 4:00, let it dry for twice as long as the 20 minutes it suggests.  I got about 35 minutes of manicure enjoyment out of it before the beads started dropping, and the polish would stretch and slough off with the beads, in one giant piece, if I used my hands for anything a person would use their hands for.  The manicure was completely fucked and removed before dinner, around 2 hours after I put it on.  NOT GOOD.  NO.  I get mad if my polish chips a day later, this shit is fucking whack as fuck and it made me so mad.  I could have bought Chanel nail polish for less than this shit, what the fresh fuck.


The thing is, I liked the look of the beads, and I really wanted to make it work.  That shitty toddler nail polish wouldn't stay on even if you didn't have a million little beads stuck in it.  I'm not a dumbass, so I could clearly see that the beads in the kit were just good old microbeads that you could buy in the craftstore.  Hell, I already had a ton of microbeads in my desk from a previous failed experiment, so I thought I would try something out, for the good of humanity.

I had mad microbeads, so I set out to find the best way to make them stick.  I already determined that stupid rubbery baby nail polish would NOT work, so I opted not to raid Nona's polish collection for my experiment.  Instead, I tried a selection of clear coats and top coats:

I picked out some gloopy top coats, because I thought those might hold better, and threw in a couple nail hardeners for the sake of comparison.  I picked 5, because I have 5 fingers on my hand, and I wanted to keep a hand free of beads for wiping my butt and scooping hummus and other activities that I didn't want to have to painstakingly clean from between a bunch of little beads.  I was optimistic, see, thinking I might be able to figure out a way to do this that might actually last 48 hours, like those liars on the Ciaté packaging suggested.

I applied a thick coat of each polish on an individual finger, and applied different colored beads to each finger so I could keep the polishes straight.  I applied them all over my existing Gelish manicure, since you can do nail art over those gel manicures and it doesn't fuck stuff up after you take it off with non-acetone.  That is why you can kinda see red between the beads in the pics (and super-see red after the beads fall off.) 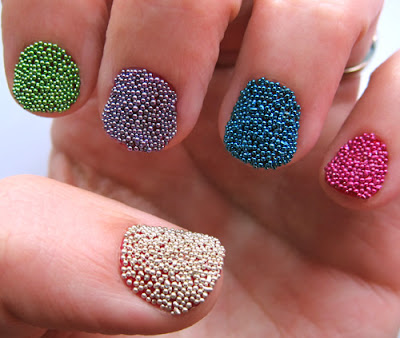 
MY HYPOTHESIS:  I thought that Nail Envy would do the worst, since it is basically just a nail treatment, and isn't real thick or anything.  I thought the Insta-Dri might do the best, because it dries fast and seemed to apply better than the others.  Of course, I was right because I am beautiful and perfect and The Smartest Lady In The Whole World™.

The first thing I noticed was that the beads seemed to be a little testier about sticking (not much, though) but stuck more tenaciously once the polish dried.  So far so good, right?

The homegrown caviar manicure outlasted the Ciaté pretty easily.  That is not to stay that it stuck... The beads started falling off as soon as I got a little water on my hand.  The worst bead-shedders were the Nail Envy (which I expected) and the Seche Vite (which I would have expected, if I hadn't tried to not be prejudice entering the experiment, since Seche Vite sucks a donkey's asshole.)

One interesting observation I made when the beads started falling off was that it seemed like they were falling off because the polish was eating through the coating on them.  A lot of them left behind little dents lined in metallic paint (or whatever they are covered in.)  Also, on the nails that had beads that stuck on better, the beads seemed to be losing their color.  Here are the results:

I removed the beads about 3.5 hours after application, which
was longer than the Ciaté Caviar Manicure.  Still didn't
look very good for very long, though.

It seems that this style of manicure is doomed right out the gate.  You might be able to do your nails like this if you were just going out for the night, but you'd have to walk around all evening with your hands all splayed out like you had shit on your fingers and you were trying not to get it on anything.  Even if you used the Sally Hansen Insta-Dri, which was the best at sticking the beads on, you're still going to lose a ton of them and the color of your beads is going to come off and look janky.  I also noticed that the polishes that stuck the beads on the best tended to leach the color out in a way that put little bead stains on my manicure underneath.  OH WELL, I GUESS.

The Ciaté Caviar Manicure seems to have shitty, rubbery polish in order to avoid the color-leaching thing, at the expense of longevity.  I'm gonna give this ish the gasface, unfortunately, as much as I liked the results.

It's your call, kid.  Neither work particularly well, the homegrown version is only better in that it lasted a few hours instead of barely two, and had the added problem of color loss.  I'm gonna stick to my manicures that aren't a complete time-waste and don't make it so I can't use my hands for anything.